We started a fairy garden for our granddaughter about eight years ago. We’ve enjoyed adding items to it through the years. When we added grandsons it seemed only fitting the fairy garden had a carport and cars. It was time for a major makeover!

And did I mention our fairy garden is right under a trellis of honeysuckle vines I trained to grow there. It is blooming right now and smelled heavenly as I toiled in my garden. ☺️

My before photo does not clearly show how bad of shape our fairy garden was in, but will give you an idea. 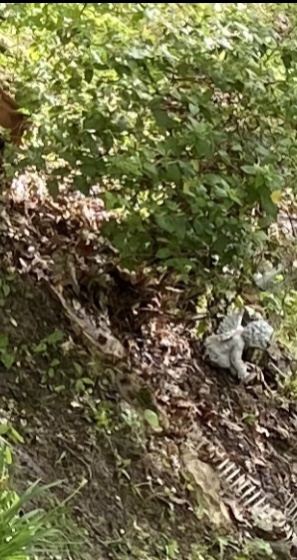 Here’s a video I made and below I will add individual photos and some hints on how I made my pond this year so you can get a better look and maybe some ideas to create a fairy garden of your own. Whether you have kids, grandkids, or none of the above, if you have never had a fairy garden, you should. They are a lot of fun to create. 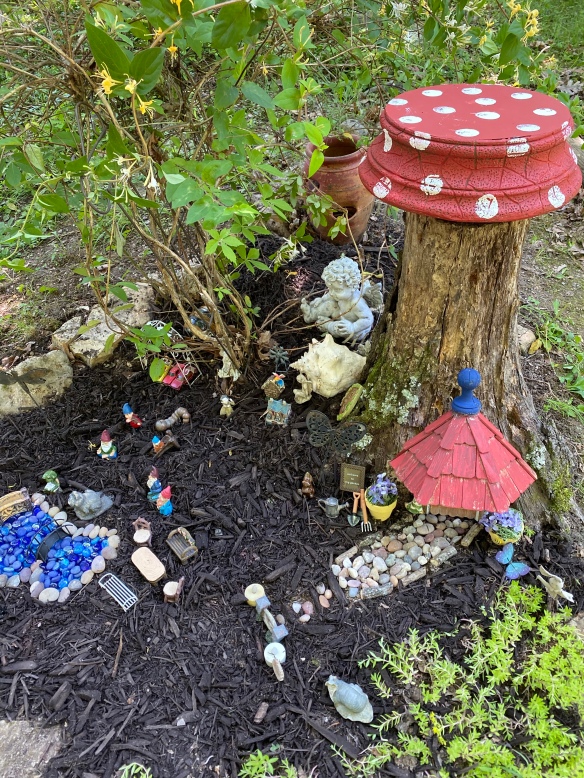 I have painted two rocks to look like gnomes and will paint two more for each grand and have them add to the garden. I painted them with Our Missouri Limestone Paint Company colors and then sealed them with spray lacquer. 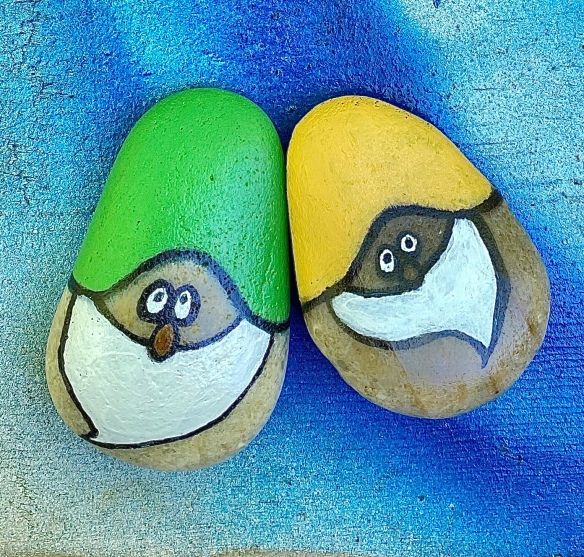 I also plan on adding a miniature toy train as a couple of the boys love trains.

Through the years, some things broke beyond repair and some were just getting old. Last year seemed to be the roughest winter on the garden yet, so in 2020 with plenty of time on our hands, we made over the fairy garden.

It was kind of a treasure hunt digging down into the dirt to retrieve buried fairy items. And then the scrubbing of those items had to take place. But some, even with their rusty and worn look, are still treasures to keep.

We did find a few new ones for $1.00 each at our local Dollar Tree. They had little gnomes so we added gnomes to our garden this year. But forget the llama… I already gave it to my granddaughter who loves llamas. I crocheted a few, painted a couple and even made some coffee cup quotes this winter using llamas, so I will have to find another to add to my fairy garden.

I made the door with jumbo craft sticks from Dollar Tree (another Pinterest idea). I used a bit of hot glue (to hold in place) along with E6000 for durability outside to glue the sticks to the braces which were 4 glue sticks cut to size (2 for the front and 2 for the back). The window is a glob of hot glue with a clear half gem from Dollar Tree presses into it. 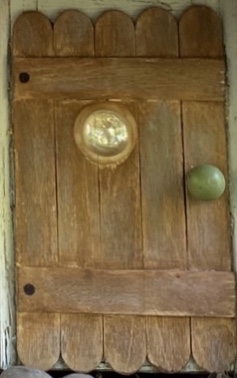 The roof was what was left from the bird feeder we had sitting on top of the stump the last several years. Danny reworked it and we were amazed the door fit perfectly inside the part it did. He attached the door and then screwed the whole unit to the stump. I gave it just a little paint so it still looked weathered.

The mushroom top on the stump was a resin base of some kind we had sitting around for years I painted it and added white polka dots with a foam stencil dauber. It is very heavy so it is just sitting on top of the stump. 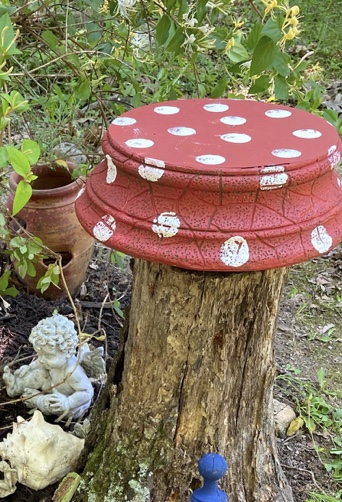 I also dug out all the gems from Dollar Tree we had used earlier for a pond so I wanted something to contain them.

Now for the pond I created this year:

I saw an idea on Pinterest and thought it would work, and it did. I used a plastic sheet like a report cover and then drew out an outline and then just made a thick border of hot glue and then just created a grid like inside so my gems wouldn’t fall out and get buried again. I painted it with some colors of water with our MLPC paint and even added a little glitter paint I had. You were supposed to be able to peel the glue formation off the plastic when dry and you can, but I chose to cut around my form and keep it so I would have another layer for my gems.

We will continue to add more items, I’m sure. And the grands will rearrange what we have many different times. 🥰

But what fun memories we will continue to make in our magical fairy garden.